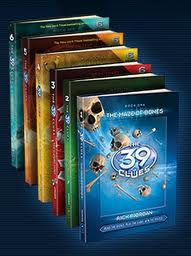 guys, this series is one of the best in the history of mankind.  The 39 Clues is a series written by about 5 different authors. There are currently 12 in the series with more being written.  When orphans Amy and Dan Cahill’s grandmother passes away, she leaves behind a legacy for her family. If a person/family finds all of the clues (which are ingredients), they will have the power to rule the world. Now, if the clues get in the wrong hands, the world could be in complete chaos.

There are five branches that come from the five children of the first Cahills: Lucians, who’s family tree is composed of great leaders and spies; Ekaterina, who are the world’s greatest inventors and scientists; Thomas, who are explorers and athletes. Janus consists of artists, and Madrigal. For  hundreds of years, no one knew that the first Cahill had another child. She was born after the others had moved away, and her mother taught her to make sure that her siblings, and later the branches, kept peace between each other.

These books are a reading level 3rd grade and up. This series is really interactive and you can learn about real historical characters that are interjected into the stories. The series’ website (which I highly recommend) is: http://the39clues.com You can make an account and solve the clues!

I like this series because it surprises you so often, and there are a lot of twists and turns. The authors of the books really get you into the story and make you feel what the characters are feeling. Boys and girls will like this series- my neighbor, who is a 4th grade boy, LOVES this series. And I do, too.