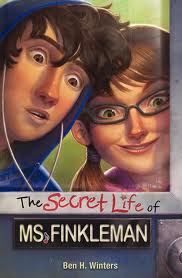 The Secret Life of Ms. Finkleman by Ben Winters is about a girl named Bethesda. Her class is assigned a special project: Solve a mystery in your life. Bethesda is already positive she is going to do it on their drab music teacher, Ms. Finkleman. She knows a little bit about other teachers, like if they are married or have kids, but Ms. Finkleman doesn’t even have a picture of her family or something on her desk! Eventually, Bethesda finds out that her music teacher was once a rock star! The whole school goes rock crazy, and has a rock concert.  But the concert might not work out as easily as Bethesda and her classmates had hoped…

I love this book! I love mysteries, and I love them even more when the person solving them relates to me! There are a lot of good details and you can imagine the characters in your head. I also love it because it talked about having a band which relates to me too! The book is really unpredictable in a good way. At first, I was thinking, “Oh, I know what’s going to happen- it’s so obvious!” But then something happened that was totally not what I thought would happen! All of the characters (especially Bethesda) are really well developed. This book is on a 5th- 7th grade reading level and will appeal to boys and girls.