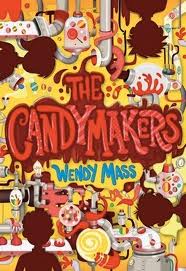 The Candymakers by Wendy Mass is about four kids who go into a competition to make the best new candy. Logan is the Candymaker’s son. He has lived in the candy factory since he was a baby and can detect the kind of chocolate by touch alone! He feels the pressure from his parents to win the competition, but he isn’t sure he can do it. Daisey, the only girl in the competition, strikes Logan as a little unusual since she doesn’t know a thing about candy. Miles just seems a bit odd (saying he is allergic to merry-go-rounds and all) but seems like a nice guy. Logan doesn’t know what to think of Philip, who hates candy and wears a suit everyday. Who will be the champion???

I really like this book. I think it is cool how there are different parts of the book told by different characters. By knowing all of the characters back stories, it made the book a lot more intriguing to read. I think the author did a great job slowly unfolding the story and not giving everything away at once. She also did a good job adding comic relief. This book will appeal to boys and girls on a 5th-7th grade reading level.