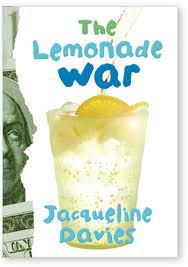 The Lemonade War by Jacqueline Davies is about Evan and Jessie, a brother and a sister who are very close. They love to hang out together during the summer. Evan is excited to start fourth grade until he learns that Jessie, who is supposed to be going into third grade, is skipping a grade and will be in Evan’s class. In the week before starting school, the kids decide to have a contest. Whoever makes the most money selling lemonade wins. And winner takes all.

I saw this in my issue of Discovery Girls (a magazine) and decided to check it out. This book is OK. I like how the book gave you actual ideas for making a lemonade stand better and how (yes, I know this sounds cheesy) when you work together things work out better. I think the plot and the characters could be a bit stronger and more detailed. Also, the kids act a little too old for their ages (which are 8 and 10). It doesn’t have much humor, either. This book is on a 4th-5th grade reading level.